Veganism: What and Why?

Veganism, along with vegetarianism, has become an increasingly popular lifestyle in today’s society. It rejects the concept of using non-human animals for trade, sports, and anything to satisfy our human needs.

One confusing aspect of veganism is the difficulty of differentiating the lifestyle from that of vegetarians. According to The Vegetarian Resource Group, just like vegetarians, vegans don’t consume any meat (i.e., fish, red meat, chicken, turkey, etc). In addition to this, vegans neither consume nor use any animal by-products. This includes eggs, dairy products, honey, leather, fur, silk, and more.

While there are many reasons why individuals pursue a vegan lifestyle, the vast majority switch due to two particular reasons: non-ethical treatment of animals and environmental concerns.

Based on the concept of speciesism, this controversial topic is one of the leading reasons why many switch to a vegan diet. One instance of non-ethical treatment of animals in the meat industry is the cruel slaughter as their production rate decreases. For instance, egg-laying chickens—one of the most abused animals in this industry (see video here)—are kept in cages the size of a vinyl record cover their entire lives. Male chicks, serving no use in the egg industries, are killed through suffocation, decapitation, or crushing.

Cows endure similar abuse. They are castrated, branded, and dehorned shortly after birth (1-3 days). Dairy cows are genetically manipulated to produce 4 times as much milk as they naturally would, and they are chained by the neck to milking stalls. They spend most of their lives there until their milk production decreases. 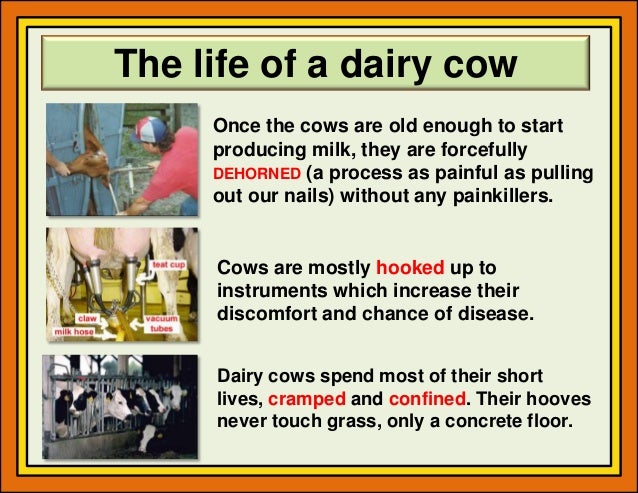 Similarly, pigs spend most of their lives in either gestation crates or farrowing crates, which are only 7 feet long and 2 feet wide. This size is not enough to even turn around. Mother pigs are continuously impregnated, giving birth to over 20 piglets each year until production decreases. Piglets are taken away from their mother after only 10 days, and then packed into overcrowded pens where they will stay for the next 6 months or until they reach 250 pounds. At this point, they are ready to go into their last stage: the slaughterhouse.

Millions of chickens, cows, pigs, turkeys, fish, and other animals are abused each year only to satisfy our human demand. These procedures all happen without any anesthetics.

Livestock isn’t only demanding to the animals, but it’s also very demanding to our environment. For instance, 70% of our global water use belongs to agriculture, from which almost 30% is estimated to be used in animal products. Additionally, most of our water is used to irrigate lands to feed livestock.

Along with this water footprint, livestock industries pose a big pollution threat to our environment. They are responsible for a big portion of emitted greenhouse gases as well as land use and degradation.

Not only is animal agriculture inhumane and harmful to the environment, but it’s also inefficient, as it has extremely high demands for tools (e.g., land, water) that would otherwise be directly used for the production of other human food. Thus, it is because of these reasons—and many others—that many people are now switching to a vegan lifestyle. According to The Vegan Society, the number of vegans in the UK has risen approximately 350% over the past decade.

Many are starting to realize that, not only could veganism be the solution to many of our environmental problems, but it’s also cruel to keep abusing animals through the mass production in these big industries.