The Future of Wave Power

The oceans contain an immense amount of power that is just waiting to be harvested. Marine power, better known as wave and tidal energy, is a sadly underused resource that lags behind in its developmental process. While wind farms and solar panels are integrating into the quotidian, very few have ever seen devices that harvest wave energy. There is a simple explanation for this, wave power is still in its developing stages.

To understand wave energy and its developmental restrictions, one must first understand waves.  Waves are how energy moves.  In the case of water waves, the water acts as a medium through which the energy propagates. Waves come in a variety of shapes from square to rounded. The wave oscillates up and down from its equilibrium position.  The maximum, vertical deviation from this equilibrium point is known as the amplitude, which determines its intensity.  The stronger the wave, the higher the amplitude. That is why the taller the ocean wave, the stronger the force it has when it crashes into something.  The peaks of waves are known as crests, while the lowest point are troughs. The distance between two crests is one wavelength, and the time it takes to travel one wavelength is the period.

Wave energy works in the same manner as all other forms of energy harvesting; the whole point is to get a turbine to spin. The turbine spins a metal wire in an magnetic field, thus producing an electric current. There are a variety of prototype wave energy converters now being tested, namely, according to the Bureau of Ocean Engineering Management, terminators, oscillating water columns (OWCs), overtopping devices, attenuators, and point absorbers.

Terminators are fixed to the ocean floor and are positioned perpendicular to the motion of the wave. They have a piston-like component that moves with the waves. In doing so, it pressurizes an air cabin that spins a turbine. 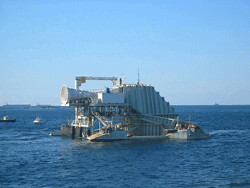 Figure 2.  The Oceanlinx Moored Oscillating Water Column Terminator off the Coast of Australia.  Image credits to the Bureau of Ocean Energy.  To find out more, click here.

Oscillating water columns (OWC) have two openings. One allows waves to move water into an air cabin which increases the air pressure inside the cabin. The air then goes out of a second hole at the top in order to stabilize the pressure. The passage of air through a turbine on its way out makes it spin.  When the wave moves back out to sea, air returns to the cabin and again spins the turbine. Watch this video to see a demonstration of an OWC.

Figure 3.  This schematic of an OWC shows the basics of its mechanics.

Overtopping devices would operate in the same manner, but in the ocean rather than on the shoreline. Water fills the top of them, and as gravity forces the water downward, a turbine is propelled.

Figure 4.  The Wave Dragon overtopping device in Denmark.  Find out more about this device here.

Attenuators are oriented parallel to the direction of the wave and are also moved by the waves.  This movement drives an electric generator. The most famous example of an attenuator is the Pelamis found on the coastline of Scotland. To learn more about the Pelamis click here.

Point absorbers can harvest wave energy from any direction, unlike terminators and attenuators, which are stuck in one plane. The waves push water up and down a pressurized seawater chamber, spinning an internal turbine.

Figure 6. Power Buoy off the coast of scotland acts as a point absorber.

Even with large array of wave energy converters, there are various factors that have attributed to the slow development of commercially seizable wave energy. With 50% of the world’s tidal energy developers and 45% of the worlds wave power developers, the European Union (EU) plays the most significant role in the development of ocean energy. (Ocean Energy development in Europe, Davide Magana) However, they face the same challenges that all other countries do, such as lack of research, affordability, marketing, and grid space.

Devices made to harvest wave energy have to be extremely durable due to the rough conditions of the ocean.  The machines must withstand the salt water and the intensity of waves, which can be very unpredictable.  Although waves are always propagating, unlike wind, their amplitude is not always enough to turn the turbine. For this reason, the location of the wave energy converters is pivotal to their success, which is why most testing has occurred in the Pacific North West and off the coast of Scotland. According to research done by the International Journal of Marine Energy (IJME), the development of such durable technology is expensive and the lack of predictability makes many investors question if wave energy is even a viable resource.

Another problem is the lack of one standard model. Although the variety of of prototypes listed above may seem valuable to the scientific community as diversity often leads to improvement, to investors it is scary.  According to the IJME, investors are looking for an extremely successful prototype that can set the standard for future wave energy generators. They do not want many small successes from different types of generators. Investors want a guarantee that they will receive a return and this will stem from a standard model that has proved reliable and worthy of further development.

Although this limits scientific evolution, the need for a standard is one of the most pressing reasons wave power has yet to hit the commercial level. Once standards are established, more work can be done to reduce the cost of production, thus lowering the cost per kilowatt-hour produced by a wave energy converter. A decrease in cost is necessary to be competitive with fossil fuels and other forms of renewable energy. The ability to be competitive is what will interest investors and win wave energy a space on the energy grid, thus making it more commercially available.

Even with the these limitations, the IJME says that wave energy is growing at a faster rate than that of wind energy when it was in its beginning stages. With the potential to provide one-third of the USA’s total energy (OBEM) and the world potential of 80,000 trillion watts of electricity per year (aquamarinepower.com), it is only a matter of time before wave energy breeches the commercial gap and comes to the forefront of renewable energy.  It is an endless supply of power that is generated by the substance that covers seventy percent of Earth’s surface.  Waves will always be there to power the ever growing human population and satisfy their need for energy.  Soon this environmentally sound form of energy will hit the commercial level and households across the globe.